The Evolution of the Toothbrush - Greenspoint Dental - Houston Dentist
X

The Evolution of the Toothbrush 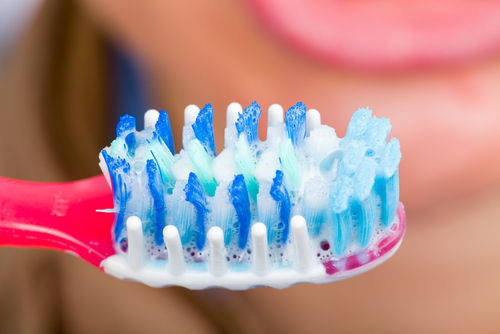 In 2003, Americans voted the number one invention they could not live without was the TOOTHBRUSH. Over cell phones and even cars, Americans chose oral hygiene. With this statistic, it should come as a surprise to discover that Americans did not regularly use the toothbrush until 1885, when they were first mass produced following the European trend.

Before Colgate and Oral-B, there were “chewing sticks.” The first appliance recorded specifically for teeth cleaning was used by Ancient Babylonians around 3500-3000 BC. They literally chewed on sticks to remove major debris off the teeth; the end of the stick would eventually fray from the chewing process, creating smaller bristle-like pieces to scrub the surface of their teeth.

The Chinese took the idea of the frayed stick and began making a toothbrush appliance using cold climate hog hair as bristles around the year 619, as first recorded. Other oral hygiene appliances found during that time included small animal bones as toothpicks. Eventually, the first “toothbrush” was created using sturdy animal bones with boar hair tied through small holes of the bone. Although it was a very rough experience, the Chinese thought it worked well.

Europeans adopted the Chinese invention in the 17th century, replacing hog hair with horse hair for a less abrasive brush. But it wasn’t until 1780 that the first actual toothbrush was discovered for mass production. William Adis, an imprisoned Englishman, did not feel fresh after using rags, soot and salt to scrub his teeth (the only mechanism given to prisoners). With the help of associates and a few guards, Adis was able to create a toothbrush for himself using a small animal bone that he stole from his dinner leftovers. He drilled holes into the bone, collected bristles from a friendly guard, and pulled the bristles through before connecting them to the bone using glue.

Upon Adis’ release, he began to manufacture and mass produce toothbrushes across European countries like Germany and England, and even gained popularity in Japan. The company was called Wisdom Toothbrushes, and after Adis’ death in the early 1800s, he passed his enterprise  along to his son, William Jr., and so on until their eventual sell in 1996. Two types of bristles were offered to consumers. The cheaper version used pig bristle, which got the job done but was very rough. The more expensive brushes were made of badger hair as a softer, more comfortable alternative.

Toothbrushes in the United States

As previously mentioned, toothbrushes were not commonly used in America until 1885 when H.N. Hadsworth patented the first toothbrush in America using animal hair and bones. In the early 1900s, users began to realize that animal hair collects bacteria and the celluloid bristles were introduced. The first nylon toothbrush bristles were manufactured in 1938, leading to the eventual use of thermoplastic bristles to ensure longevity and cleanliness.

In the 1980s, Johnson & Johnson created “Reach.” Their redesign included three updates to the toothbrush that changed our brushing habits and expectations forever. Reach included the first angled head which helps with reaching the back teeth. Second, the bristles were more concentrated in the center instead of the previous, more spread out approach, in order to pick up more of the small, cavity-causing bacteria that sticks to the crevices in hard-to-reach areas. Finally, Reach had bristles that were longer and softer on the outside to fit in between teeth and shorter, and firmer inner bristles for a harder scrub.

From chewing on sticks, to plastic bristles and handles, toothbrushes have ventured a long way before reaching the #1 spot for the most valued appliance in America. If you are in need of a new toothbrush or want to know more about how to keep your smile bright, contact Greenspoint Dental to set up an appointment in the Houston, Texas area.