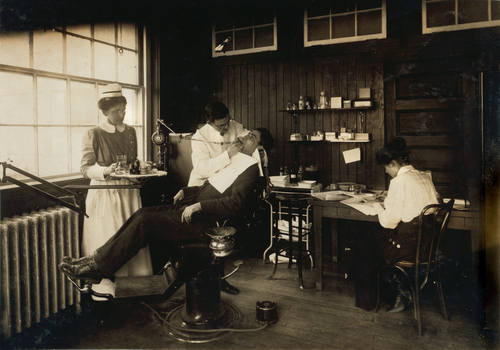 The field of dentistry did not suddenly appear out of thin air one day. Unlike other fields of medicine and science, dentistry is thousands of years old! Throughout time, humans have constantly inspected and attempted to treat oral ailments. Of course, methods used in certain periods of dental history are not as advanced and refined as modern procedures, but much of what dentists know today is based on the practices, advancements, and trial and errors of historical dentists. As such, it is important to gain an understanding of how teeth, and the methods used to treat them,  have developed over time. Read on for an insightful look on how modern dentistry came to be:

Dentistry, in fact, is very, very old. The first signs of dentistry began anywhere between 5000-7000 BC. Some believe that ancient civilizations, such as the Indus Valley Civilization, participated in primitive methods of treating teeth, such as the use and application of bow drills. The American Dental Association officially reports that Sumerian documents from 5000 BC document cases of “tooth worms” as causes of tooth decay. Jump forward to 2600 BC, to the time of Hesy-Re, an Egyptian scribe that many attribute as the first real dental practitioner. Even the people of his time believed this, for his tombstone is inscribed with words that translate “the greatest of those who deal with teeth, and of physicians”.

In 300-500 BC, Aristotle and Hippocrates expanded the field of dentistry through their writings about tooth decay, tooth treatment, and tooth removal.

As the years and centuries pass, dentistry continues to advance. In medieval times, physicians and dental practitioners had more knowledge and tools at their disposal as compared to their ancient colleagues. Tooth extraction (often without pain medications) was a common treatment throughout the Middle Ages. Believe it or not, many “dentists” were actually called “barbers”, as they were members of France’s Guild of Barbers, a group of surgical professionals established during the time. Many dental practitioners were known as “lay-barbers”, a class distinct from regular barbers, who specialized in medical surgery operations.

Unlike previous periods of dental history, the 18th and 19th centuries saw an explosion of progress in the field of dentistry. As knowledge became more easily and readily available around the world, dental practitioners were able to share their findings and advancements like never before. Pierre Fauchard, the Father of Modern Dentistry, revolutionized dental knowledge and practice with new ideas presented in his book, The Surgeon Dentist, a Treatise on Teeth. Dentistry also progressed during this era with advancements in tools and equipment. James Snell, for example, invented the dental reclining chair in 1832, while the American Journal of Dental Science begins publication in 1839, greatly expanding dental knowledge and awareness.

Truly the 18th and 19th centuries, as well as all other periods of dental history, laid the foundations to what dentists know about the human mouth today. The next time you visit your dentist’s office, remember you are participating in a practice that has developed over thousands and thousands of years!

For more information, or if you wish to schedule an appointment “centuries in the making”, contact Greenspoint Dental today!